Heads-up: A New Complation in the Pipeline

Analog Africa is going to release a compilation of Somali music from the '70s and '80s. The reissue is slated for 13 December, but you can already pre-order it on Bamdcamp and below is the appetiser:

A mindblowing mixture of Somali Funk, instrumental masterpieces and previously unreleased Reggae tunes from the vaults of Radio Mogadishu. We´ve prepared a little beauty for you, a beauty you can Now Pre-Order on Bandcamp! Bandcamp orders will be shipped on December 1st, basically two weeks before official release date!

The LP comes with a 16 Pages Magazine-Size-Booklet and the CD comes with a wonderfully designed 44 Pages Booklet! In that booklet 50 pictures and biographies of the artists are included .....and a lot of passion !!

A bonus track (from this blog, not in the compil).

P.S. (November 26): I've recently seen the liner notes and they're truly fascinating. I read the 16-page Berliner/broadsheet in one go while travelling on the train and when I was done, my initially steaming cup of tea was already ice-cold and still half-full. The booklet is peppered with alternately informative/chilling/entertaining anecdotes and interviews with artists & others involved in the music profession, period-perfect photos & posters, interesting Somali newspaper clippings from the years covered by the compilation, spellbinding accounts of Analog Africa's own adventures in Mogadishu etc. All the above make the album notes vividly alive and captivating. Simply fantastic! 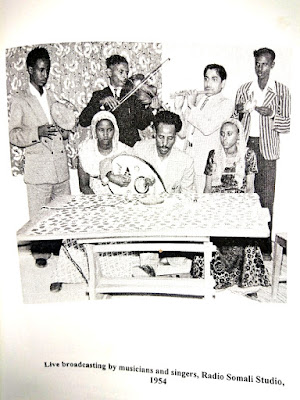 A few pro-independence tracks originally recorded by Radio Hargeysa in the 1950s. Shamis Abokor (Guduudo Carwo) & Cabdillaahi Maxamuud (Qarshe) were among the pioneers of the modern/popular Somali music that was spearheaded by the dhaanto in the 1930s and, mainly, the balwo & heello and their multiple subgenres in the 1940s. All the tracks on this post belong to the latter two styles.

The epithet 'modern' denotes, in my view, that the shortened songs were played by innovative artists on mainly non-Somali instruments and aired on the newly-established radios, which often employed the musicians. The older Somali music is more sophisticated as it uses a wider variety of centuries-old traditional instruments, singing modes, scales, (sub)genres, dance techniques etc. Unfortunately there were, before the 1940s, no/hardly any facilities to record, broadcast or distribute music. All was live and localised, except the touring artists who were largely hindered by the long distances and dearth of adequate transportation or funding.

This live session comes from Francesco Giannattasio, professor of ethnomusicology at the Sapienza University in Rome. He recorded it during one of his fieldwork researches on Somali music in the 1980s.


3. Qabanqaabiyoo Wax Ila Qabo ("Help Me to Organize [the Struggle for Independence]")

First things first: Condolences to all Somalis, and specially to the families and friends of Khadiija Cabdullaahi “Dalays” and Shamis Abokor "Guduudo Carwo" who passed away yesterday and last month respectively. Both (grand)mamas are highly regarded as prominent pioneers of modern Somali music and they actively participated in the anti-colonial movements in the 1950s. Highest esteem forever!

Isbahaysiga Fannaaniinta Banaadir ("Alliance of Banaadir Artists") was a syncretist theatre troupe for and by the youth, mixing traditional dance and music with modern influences. It's composed of dozens of artists who turned professional in their teen years. They originally came from all parts of the country but were based in Banaadir, i.e. Mogadishu and its neigbourhood. Most of them were also simultaneously multitasking with LMB or other bands.

IFB's plays portrayed straight up a wide spectrum of the youth life in the 70s and 80s. Their main focus was directed towards the day-to-day life as well as cultural and socio-economic issues facing the younger generations, such as coming of age, joys and woes of love, carefree relaxation, adventurous fun, (cultural) education, social volunteering, (un)empolyment, entrepreneurship etc.

Their fascinating artistic career was, alas, cut short by the civil war. Most of the members are now world citizens residing in the four quarters of the globe. Quite a few have unfortunately passed away and this YT playlist (I couldn't embed it or find IFB videos!) shows several of them with their other bands: Ciise Daahir Qaasim (keyboardist on video 1 & 8, see footage below), Shiikh Cabdi (guitarist on 2, 3 & 5), Xaawo Hiiraan (singer on 4), Cantar Naaji and Siciid Cabdalla (respectively drummer and guitarist on 6). A.U.N./R.I.P.


All the tracks below and a few more are downloadable here; they're probably bootlegs recorded live by the spectators. Enjoy!

Happy, healthy and peaceful new year to all!

1. Hooyo ("Mama [A moving and heart-warming tribute to all mothers]")


2. Qiimeen Adaa Mudane ("You Deserve to Be Cherished")


11. Nal Ka Nuur Badaneey ("You're Brighter Than the Light")

This is the soundtrack of the 1980s theatre play Maxkamaddii Jacaylka (Trial of Love / Love Is On Trial). I don't have much to tell about it as I haven't seen it. Faadumo Qaasim & Axmed Naaji Sacad get together once again as the main singers on the album.

I'm not fluent in Banaadiri dialects and I’ve the impression a track or two may be missing and/or tracks are interchanged. For example, the first song's title implies that it's about the first (blind) date. However, the lyrics are warning from the outset against "the unconscionable satan that's driving/driven a wedge between Adam and Eve / the two [lovers] whose hearts are companions...". Its logical position would thusly be 6 or beyond and track 1 would be missing from my tape; happens a lot in copied k7s. Corrections and additional info. are most welcome!

NB: Issue with the BBC has been resolved. Scroll down to the end of the post for the result

The compilation Sweet As Broken Dates: Lost Somali Tapes from the Horn of Africa has been captivating the attention of the international press. As all interested could notice, it’s highly praised and rightfully so. The successful adventure undertaken by the compilers to travel all the way to and around the Horn of Africa certainly tugs at my heartstrings.

What eludes the uninformed eye and nonpluses the marked soul is, sadly, that the coverage also propagates known and new myths about Somalia and its Hoobaal (ancient Somali Goddess of art/music). I’ll handle a few of the dazzling acrobatics presented as natural facts by the giants of the media, in some cases generously fed by the title of the album and the promotional buzz. How influential these media outlets are is illustrated by the huge number of sources that literally copied and pasted (parts of) their reviews.

Heads-Up: Compilations in the Pipeline 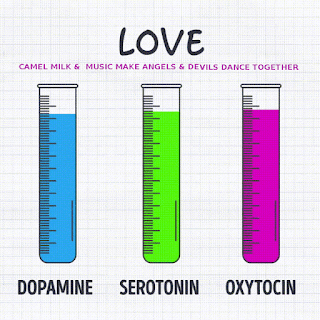 Two compilations of Somali music from the 1970s and 80s are about to be released:

1. Analog Africa is cooking up a tropical stew. I can't give details except this: I initially informally accepted to write the liner notes but, all of a sudden, AA disappeared from the radar exactly when I asked about the planning. Only to reappear half a year later when I was disappearing under a pile of work. That's why I'm, alas, no longer involved in this beauty.

2. Ostinato Records: The compilation, a follow-up to Au Revoir, Mogadishu Vol.1, will be released this summer. 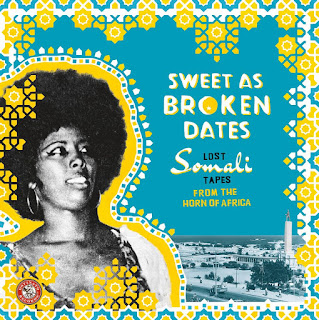 You can read more about the fascinating process here and below is the teaser:

A selection of lost sounds from a Somali archive. Travel with us to the Al Curuuba hotel in Mogadishu, the dusty streets of Hargeisa, and the shores of the Gulf of Tadjoura in Djibouti. A full compilation album, remastered and treated with the utmost love and care, is slated for release this year. Some of the songs in this mix made the final cut. We hope you enjoy!

The package will contain a sizable booklet including, inter alia, an interview with me. I think that some/many visitors of this blog are logistically or otherwise impeded from acquiring the LP/CD. I've, thus, decided to post the entire Q&A... in harmony with the interviewer, that is. The yellow texts, videos, audio clips and pictures are not in the liner notes. Hoping for critical and con/instructive feedback, specially from those who are well-versed in Somali music in general or the concerned period in particular. 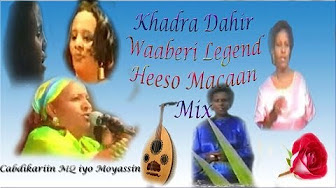 I've heard that Khadra Daahir is seriously ill but I couldn't verify it. If that's the case, I wish her a speedy recovery and, in all cases, all the very best.

This is, by far, not KD's best tape but the others I have are so distorted that they sound quite Martian, musically and linguistically. I understand celestial tongues and tunes as I come form Jupiter, but you Earthlings would be lost. Moreover, the lyrics on this one are very significant as they're all about love, mutual respect, tolerance...

This post is dedicated to all consenting adults whose love life is judged, misprised and even threatened by pontificating herds whose common sense is blinded by outdated interpretation of traditions, religions, borders, materialism etc. Love is ALWAYS right!